10 Reasons to Take the Kids to Valencia, Spain

If you’ve done Barcelona and loved it but perhaps found it a bit crowded and a little over-priced in places, we heartily recommend the port-city of Valencia on Spain’s south-east coast. Like Barcelona, Valencia is a nigh-on perfect blend of different elements – a city-on-the-sea, it has sandy beaches, but also wonderful green spaces, world-class museums and attractions, fabulous food and great shopping. And despite being Spain’s third-largest city, it also has a cosy feel. What’s not to like? The following are our favourite things to do in Valencia with kids.

• Hire a family trike and go for a ride along the old river-bed, now transformed into the 9km green lung of the Jardines del Turia, taking you from the historic centre to the City of Arts and Sciences in a delightful setting of orange trees and lush palms. All human life is here – toddlers playing in little pools, teenagers skateboarding in the dedicated park, roller-bladers, petanque-players, families playing mini-golf and picnicking, and all ages enjoying the slides on the prone giant at Gulliver Park.

• Spend at least a day at the Ciutat de les Arts i les Ciències, at the other end of the Jardines del Turia from the Centro Historico. Designed in part by Santiago Calatrava, this thrillingly futuristic cultural complex embraces the giant-eye-like Hemisfèric (an IMAX Cinema, planetarium and lazerium) and El Museu de les Ciències Príncipe Felipe, an interactive science museum designed to evoke a whale skeleton, with both permanent and temporary exhibitions on everything from dinosaurs to DNA. The highlight with kids, however, is L'Oceanogràfic – one of Europe's biggest aquariums, built in the shape of a water lily and largely outdoors.

But the City of Arts and Sciences is not all about knowledge and culture: the complex's vast pools are a great place to play on a sizzling summer day, with water zorbs, kayaking and motorised paddle-boarding, while the outdoor Walk of the Sculptures in the L'Umbracle is divinely scented by local plants including rockrose, lavender, honeysuckle and bougainvillea. 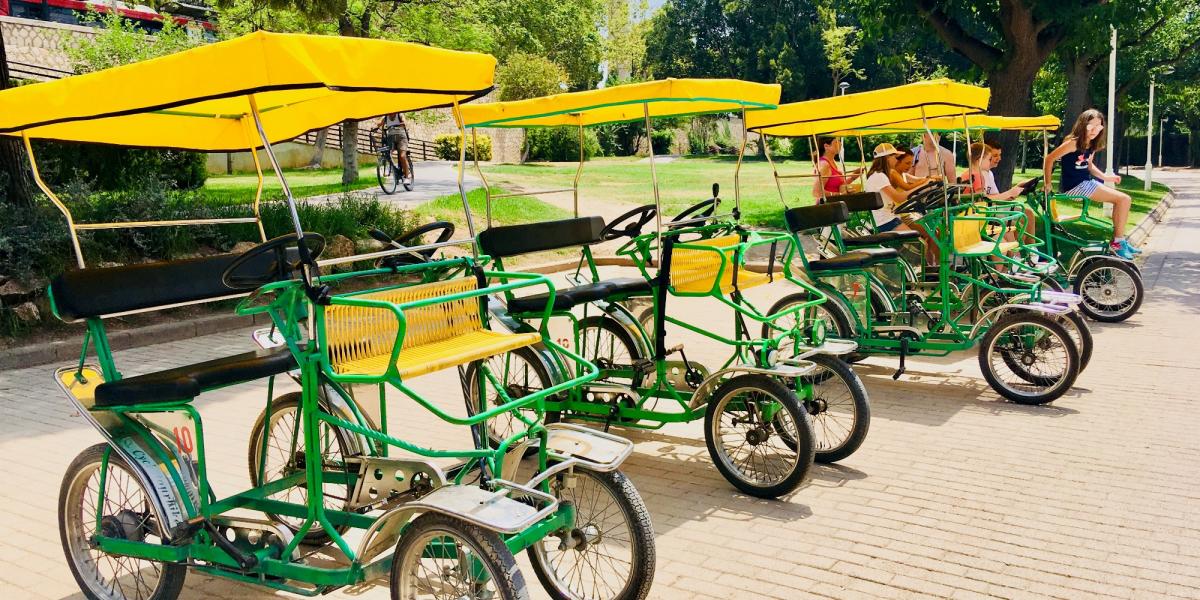 • Come for the Fallas Fiestas in March. Valencia's biggest celebration, it involves fireworks and firecrackers, bonfires, music, traditional costumes and a parade of colourful ninots (giant papier-mâché figures, often satirising politicians or celebrities) to celebrate the arrival of spring. If you can't make it for the event, you can see some of the ninots and costumes year-round at Las Fallas Museum or even take a family workshop with a fallas artist.

• Have a Sunday lunch of paella on the beachfront. Valencia's city beach is not the most spectacular, but it's clean and expansive. A leisurely seafood lunch (we recommend La Pepica) followed by a lazy afternoon on its golden sands is the perfect way to live like a local.

• Browse a market. The vast Mercat Central de València in its glorious Art Nouveau building is the place to shop amongst locals for regional produce including snails and more varieties of prawn than you knew existed. Live eels wriggle in tanks and giant hams hang temptingly. There's also the Mercado de Colón, a lovingly restored Modernist building housing a food hall with lots of funky little cafés perfect for taking a break from the heat over a cooling glass of horchata (a local tiger-nut milk drink) and a plate of fartons (sugared bread-sticks).

• Just wander. Valencia is very much a city for idle meandering and getting pleasantly lost, with lots of narrow alleys to amble along. In the historic centre, gorgeous architecture (don't miss the jaw-dropping facade of the Museo Nacional de Cerámica y de las Artes Suntuarias González Martí) rubs shoulders with vibrant street art, meaning there's something new and surprising to see around just about every corner.

• Take a trip just 10km out of Valencia to the Albufera Natural Park, home to Spain's largest lake (with boat-trips – best at sunset) as well as sand dunes, forests and rice fields. There are bike routes to explore and a village called El Palmar where you can refuel on local rice dishes including paella (invented in Valencia), all-i-pebre (with garlic and paprika) and marinated mullet.

• Eat tapas in any number of great-value, family-friendly restaurants in Valencia (dining out is generally very inexpensive here). Sharing dishes is an ideal way of eating out as a family, and many restaurants have outdoor tables, meaning the kids can have a play while you wait for your food. Some of our favourites in the historic centre are Vinotinto, Le Senai and La Pizca de Sal for their classic and inventive tapas (La Pizca is at its best at night, when you can sit out in the plaza by the illuminated 15th-century Torres de Quart). In the morning, La Rollerie is a winner for its cinnamon rolls, churros and other breakfast and brunch dishes.

• Stay in a wide choice of family-friendly hotels in Valencia. We liked the sleek, modern Primus Valencia for its location right by the City of Arts and Sciences and its pretty, shady garden with its outdoor pool. Another favourite of ours is One Shot Mercat, a hip boutique hotel with a small rooftop pool, best for those travelling with teens.

For more on family breaks and family holidays in Valencia and information on the Valencia Tourist Card giving free bus, metro and tram travel, including journeys to and from Valencia airport, free entry to municipal museums and monuments and other attractions and discounts on others, see Visit Valencia. And read more about family holidays in Spain.