A City, History and Beach Break in Naples, Pompeii and Procida, Italy

Getting to Herculaneum and Pompeii is an adventure in itself. Both of these world-class archaeological sites lie on the ramshackle Circumvesuviana railway that rattles passengers along the coast from Naples to Sorrento on the Amalfi coast, often accompanied by buskers playing jolly Italian music that gets you fully in the holiday mood – unless, that is, you’ve reached the tender ages of 17 and 15 and are far too cool to smile at such displays.

‘Herculaneum has several groups of skeletons preserved by ash – mainly children and teens who were sent to shelter in the boathouses here and got cooked alive by a pyroclastic cloud.’

We were torn between visiting Pompeii and Herculaneum, 40 and 30 minutes from Naples respectively, but finally decided to do both. Pompeii was a sprawling town and has all the paraphernalia of everyday Roman life in evidence, including the famous brothel and the world’s oldest surviving Roman amphitheatre. Herculaneum was smaller and wealthier and gives less of an idea of daily life in that era, but its size means we were happy to let the teens wander off exploring on their own.

And while the biggest hit with my kids at Pompeii were the plaster casts of bodies encased in layers of hardened pumice and ash (after they decayed, archaeologists filled the voids they left), Herculaneum had something even more dramatic and moving: several groups of skeletons preserved by ash – mainly children and teens who were sent to shelter in the boathouses here and got cooked alive by a pyroclastic cloud.

Mindful of them rebelling at so much history and learning, we broke up these visits with some excursions into nature. The first was up Mount Vesuvius, where peering down into the crater that devastated Pompeii and Herculaneum and will probably devastate 25 modern-day settlements and possibly parts of Naples itself when it next blows – it’s overdue for an eruption by 30 years –puts the archaeological sites into perspective (the fact that Herculaneum sits in the very heart of the modern town of Ercolano reinforces your sense of how very precarious this area is). 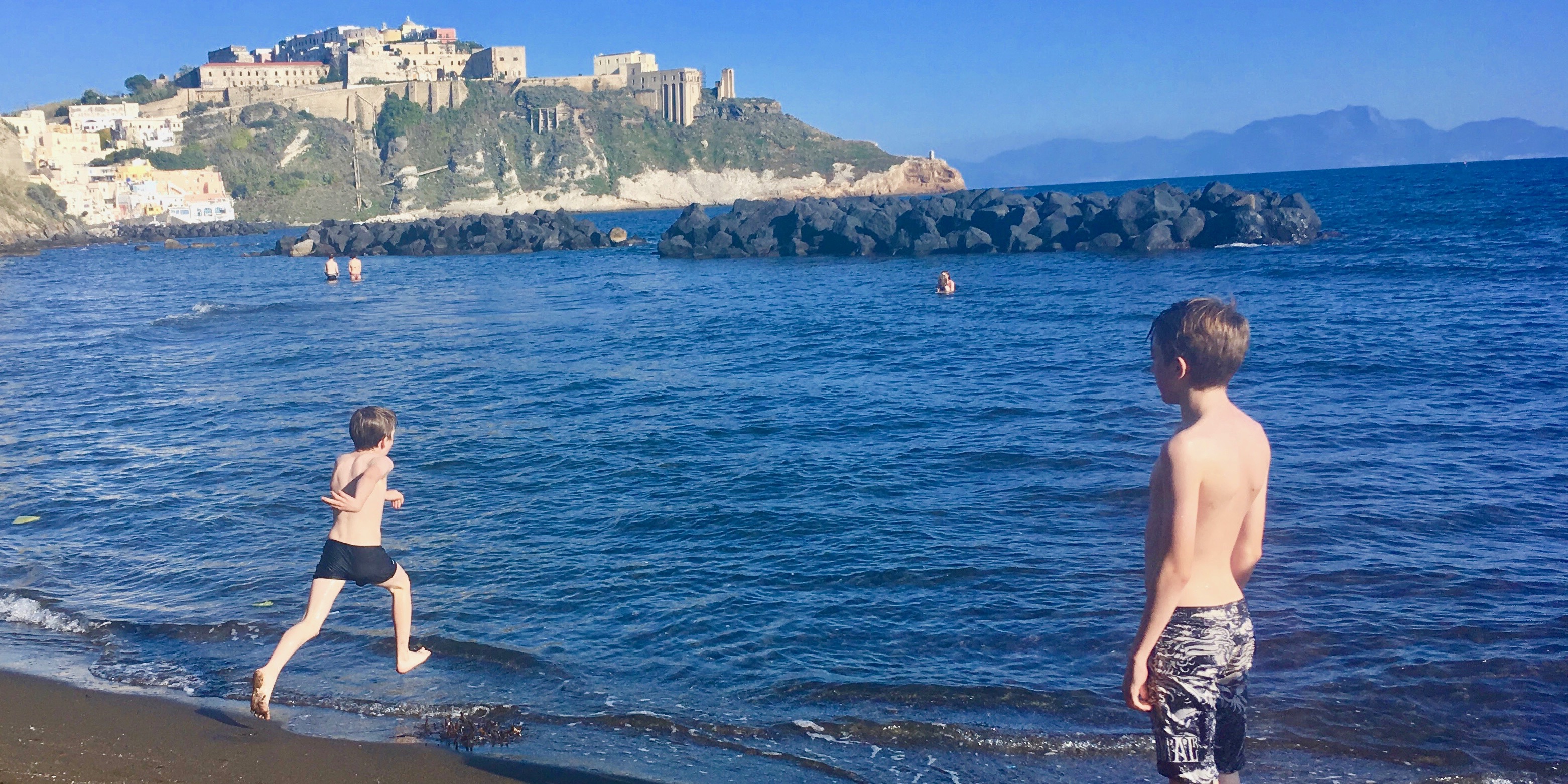 Playing on the beach in Procida

You can either hike up the mountain through Vesuvius National Park or take the bus; the latter is probably preferable with most kids because there’s still a long steep path to get to the crater and to hang over it for the inevitable gurning selfies.

From the top you can also look out over the Bay of Naples, and that was indeed our next stop when we hopped aboard a 40-minute ferry to the tiny volcanic island of Procida, one of the filming locations for The Talented Mr Ripley. There’s nothing to see here, as such, but that's part of the point. Fishermen mend their nets on the harbourfront, there’s little traffic to dodge (unlike in Naples!), and the unpretentious restaurants serve delicious food at a fraction of the price of their equivalents on the nearby Amalfi Coast.

We simply spilled off the boat and into a deli for picnic fare then headed for the shore for a surprise last beach day of the year in the sunshine (it was October half term), the teens sunbathing, the youngest, 11, larking around in the blood-warm Mediterranean against the stunning backdrop of San Michele Arcangelo monastery on its hilltop, before we all tucked into our makeshift feast of fresh bread, prosciutto, olives, cheeses, local oranges, cake and beer.

And indeed, in truth our week in Naples was really less about history and more about food - and obscene amounts of it. Pizza so good that you feel like crying even while you’re eating it because you know you won’t taste its like anywhere else (long-established Starita a Materdei was one of our favourite venues), spaghetti al vongole on the convivially raucous terrace of A Figlia do Marenaro, ragù and pasta in Tandem, and copious quantities of ice cream (our top spot being the beautifully kitsch Fantasia Gelati with its 50-plus flavours).

We almost always ate outside, beside traffic-thronged streets with horns blasting all around us and mopeds hurtling perilously along pavements oblivious to pedestrians, against a gritty backcloth of street art, graffiti, strings of laundry draped from dilapidated buildings and Naples’ famously uncleared garbage bags.

The best meal of all was a dinner in A Figlia do’ Luciano, a back-street seafood restaurant that might have seen better days. Our visit happened to coincide with a big UEFA match between city team Napoli and Paris Saint-Germain, and all around us the streets were alive with cheering and revelry as locals congregated in bars to watch.

The proprietor spoke barely English, and we spoke barely any Italian, but he balanced a TV set on a wonky chair beside our table to watch the match in-between bringing our courses, and with a bit of sign language and some wild gesticulating thrown into the mix we somehow managed to banter with him about our respective teams, Napoli and Liverpool. It was the kind of exquisitely human encounter of which the very best memories are made.

Find out more about family holidays in Campania. We stayed in an apartment but our Travel Advisors can source the best options for you.

Save up to £200 per family for May/June departures with TUI. Free child places still available. BOOK NOW.