Familiarity from a thousand and more photos doesn’t diminish the impact of Mount Rushmore in the flesh –  and that's a good thing given that you have to schlep up 422 steps to get close to the sculpted faces and, to our surprise, to 450,000 tons of rubble that were hacked from the mountain during their creation and never removed.

Your kids are unlikely to object too much as they ascend the 1km Presidential Trail to the Mount, though: there are chipmunks, marmots, mule deers and Rocky Mountain goats to spot on the way up and Junior Ranger booklets to keep them engaged. And then there’s the ice cream made to Thomas Jefferson’s recipe from the Library of Congress in the café/restaurant to reward yourselves when you get back down.

"Visit in late September and you’ll be treated to the hectic and sometimes nerve-jangling spectacle of the Annual Custer State Park Buffalo Round-up, when local cowboys and cowgirls drive the buffalo population in corrals in order to be tested, branded and sorted to keep them healthy – giving you a real taste of the authentic Wild West as it’s still lived today.”

Mention South Dakota and chances are most Brits won’t know where in the United States it is, or what you might find there. Mention Mount Rushmore and an image of four outsize presidential heads will likely come to mind…  But again, most people probably won’t know where the iconic memorial is actually located.

Rushmore was carved into a mountain in the Black Hills, a sacred region to the Sioux tribes who once lived here, between 1927 and 1941. The idea behind it was to attract visitors to this western region of the Midwestern state of South Dakota – and it certainly worked. Today more than three million people from around the world visit this landmark site celebrating the country’s founding fathers George Washington, Thomas Jefferson, Theodore Roosevelt and Abraham Lincoln. 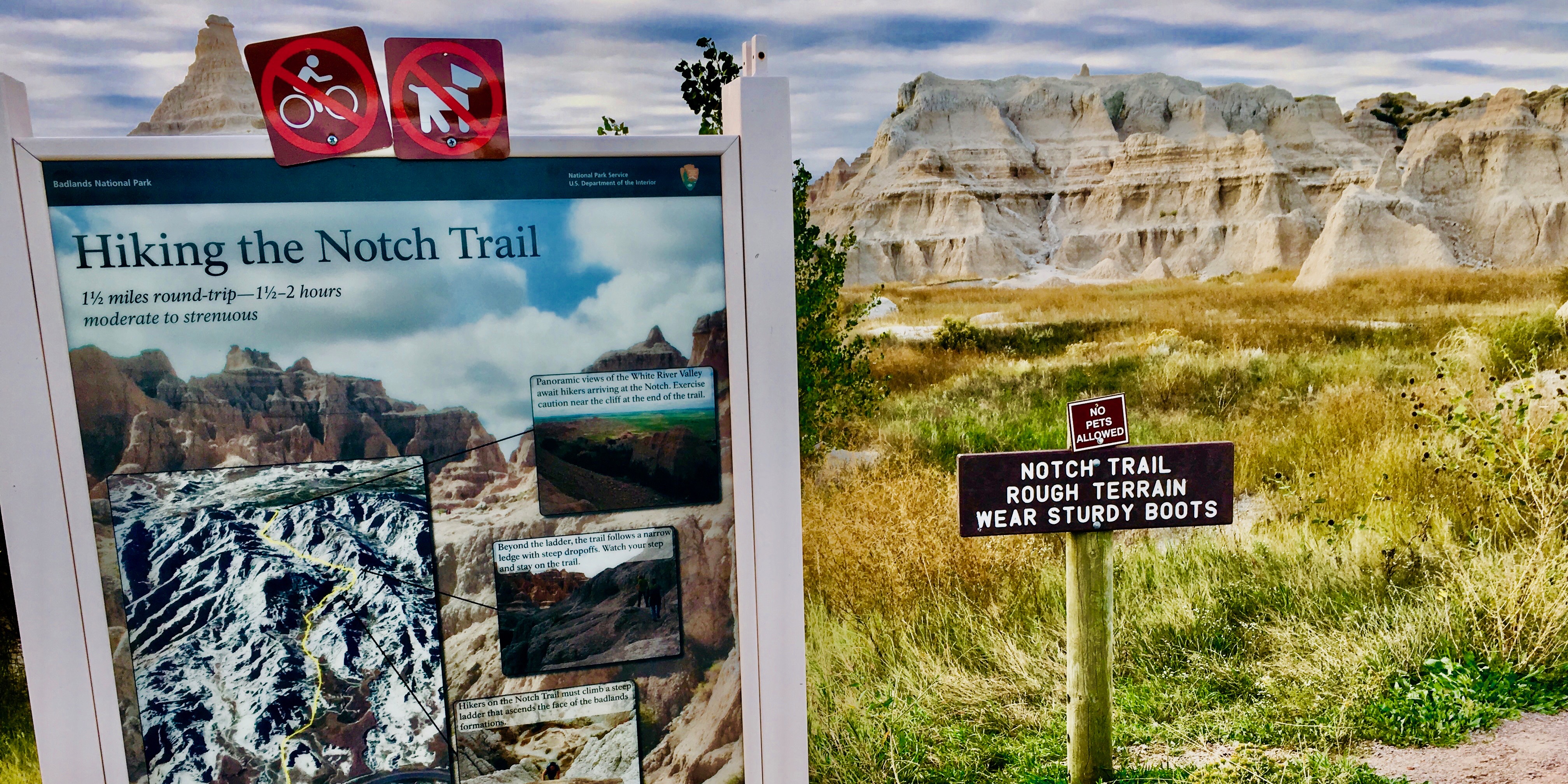 Hiking in the Badlands National Park

But Rushmore isn’t the only mountain memorial in the Black Hills. Inspired by it, Lakota chief Standing Bear asked sculptor Korczak Ziolkowski in 1948 to create a monument that would mean something similar to ‘the red man’. The result was the Crazy Horse Memorial, which is not only still in progress but has no end-date in sight. Ziolkowski’s descendants continue to work on it in the full knowledge that they won’t be alive to see its completion…

With advance booking and a donation to the non-profit organisation that is creating the memorial, you can walk up and along it. We contented outselves with a gander from the car park and visitor centre, which has interesting displays on the local Sioux heritage, shows and talks by Native Americans and a great gift shop (my son was delighted with his hand-made dream-catcher).

The Black Hills is all about its landscapes too, with the 71,000-acre Custer State Park the star of the show. Here, a herd of 1,300 buffalo share space with pronghorn, elks, mountain goats and burros – all of them best seen on a drive along its 29km Wildlife Loop Road. Alternatively, if you happen to be here in late September you’ll be treated to the hectic and often nerve-jangling spectacle of the Annual Custer State Park Buffalo Round-up, when local cowboys and cowgirls drive the buffalo population in corrals in order to be tested, branded and sorted to keep them healthy – giving you a real taste of the authentic Wild West as it’s still lived today. Other ways to see this park – on the edge of which the epic Western Dances with Wolves was filmed – are on hiking trails, horse-back or other designated scenic drives (don’t miss the Needles Highway).

Another highlight of this western region of South Dakota is The Badlands National Park with its buttes, canyons and gullies. Family-friendly hikes in this otherworldly setting include the Notch Trail with its vertigo-inducing ladder ascent of one of the formations and its rattlesnakes, and the Fossil Exhibit Trail along a boardwalk, with displays on local prehistoric finds. For the full juice on South Dakota’s rich geological history, Rapid City’s Journey Museum is a great bet, with lots of interactive areas designed for younger visitors.

There are plenty of interesting places to stay during your wanderings in western South Dakota, from the usual child-friendly chain hotels in Rapid City, including the Holiday Inn with its vast double doubles, to cosy wooden cabins at Sylvan Lake Lodge in a stunning hiking location in the Custer State Park and the Frontier Cabins at Wall near the Badlands National Park. The latter is particularly great with kids, with a teepee and fire-pit for toasting s’mores under the stars.

Don’t miss the cowboy-themed Wall Drug Store across the road from Frontier Cabins for its famous home-made doughnuts, tacky gift stores and 1.8m jackalope (a mythical animal of North American folklore) that you can climb onto for wacky selfie. There are other great selfie opportunities in Rapid City with its 44 presidential statues, some with their dogs or even, in the case of the fairly recent addition Obama, with one of his daughters. Rapid City is also a great place for those who love street art – don’t miss a stroll down Art Alley.

Food, as everywhere you travel in the United States, is all part of a great American adventure with kids. We particularly recommend the tacos at Que Pasa Cantina in Rapid City, the burgers and barbecued meats (and the craft beers and wines!) at the Firehouse Brewing Co. and Wine Cellars, the pizza at Lintz Bros in Hermosa, the modern Norwegian/global dining at Skogen Kitchen in Custer, and the breakfast burritos at Baker’s Bakery & Café, also in Custer.