A Family Glamping Break in the Lee Valley, Hertfordshire/Essex

Staycations are all about improvisation and a parent’s ability to keep up the spirits even when things go wrong. I’m reminded of this perennial truth as we peer into the empty basin of the white-water rafting course built for the 2012 Olympics and I see my 12- and 16-year-olds struggling to contain their disappointment.

Navigating the man-made rapids at the Lee Valley White Water Centre was the sole reason we came all the way down from Manchester, and a long-held dream for my boys. But if there’s anything that the Coronavirus pandemic has taught us, it’s that things are not always within our control.

'The great thing about having a dog is that you have to get out whatever the weather – and that goes double when you’re staying in a tent or a cabin where space is at a premium. There was only so long we could stay in playing camping games, watching Man v. Food or napping – or only so long that Coco would let us do so.'

Hunkering down in our dog-friendly Big Chief ‘wigwam’ at our campsite on a bend in the river at Dobb’s Weir, I checked and re-checked the weather forecast and sighed inwardly. With its fold-down beds and alfresco eating area on the decked terrace, the wooden cabin was perhaps a little too cosy for the four of us and our labrador Coco if this drizzle and wind really was set to continue for the full three nights of our weekend break. I didn't even want to think about the storm icons on my weather app.

Escaping to the neighbouring Fish and Eels waterside pub beside Dobb’s Weir itself – an atmospheric low-head dam complete with its original workings – I calmed down over a balloon-glass gintonica as we feasted on great family-friendly food and Coco was made a royal fuss over. Olympic venues aside, the Lee Valley Regional Park is an outdoorsy family’s mecca, packed with nature reserves, traffic-free cycling and walking trails, boating areas, and picnic spots. There was nothing for it, I said, but to get out and about in spite of the weather. Over their brownies, the boys exchanged a dubious glance.

But the great thing about having a dog is that you have to get out whatever the weather – and that goes double when you’re staying in a tent or a cabin where space is at a premium. There was only so long we could stay in playing camping games such as Gentlemen’s Hardware ‘Would You Rather’, watching Man v. Food or napping – or only so long that Coco would let us do so.

Thus it was that we spent a day following the Lee Valley Walk South leading down towards the White Water Centre from Broxbourne Old Mill and Meadows. Having breakfasted on hearty bacon butties at Old Mill’s cute café (and promised ourselves some of the alluring home-made cakes on our return), we set out along the towpath along the river, passing colourful houseboats festooned with ripening tomato plants, marrows and other home-grown produce. It wasn’t long before the boys had talked me into looking into booking us a houseboat holiday and perhaps even investing in our own houseboat – not such a bad idea, I thought, in times like these. 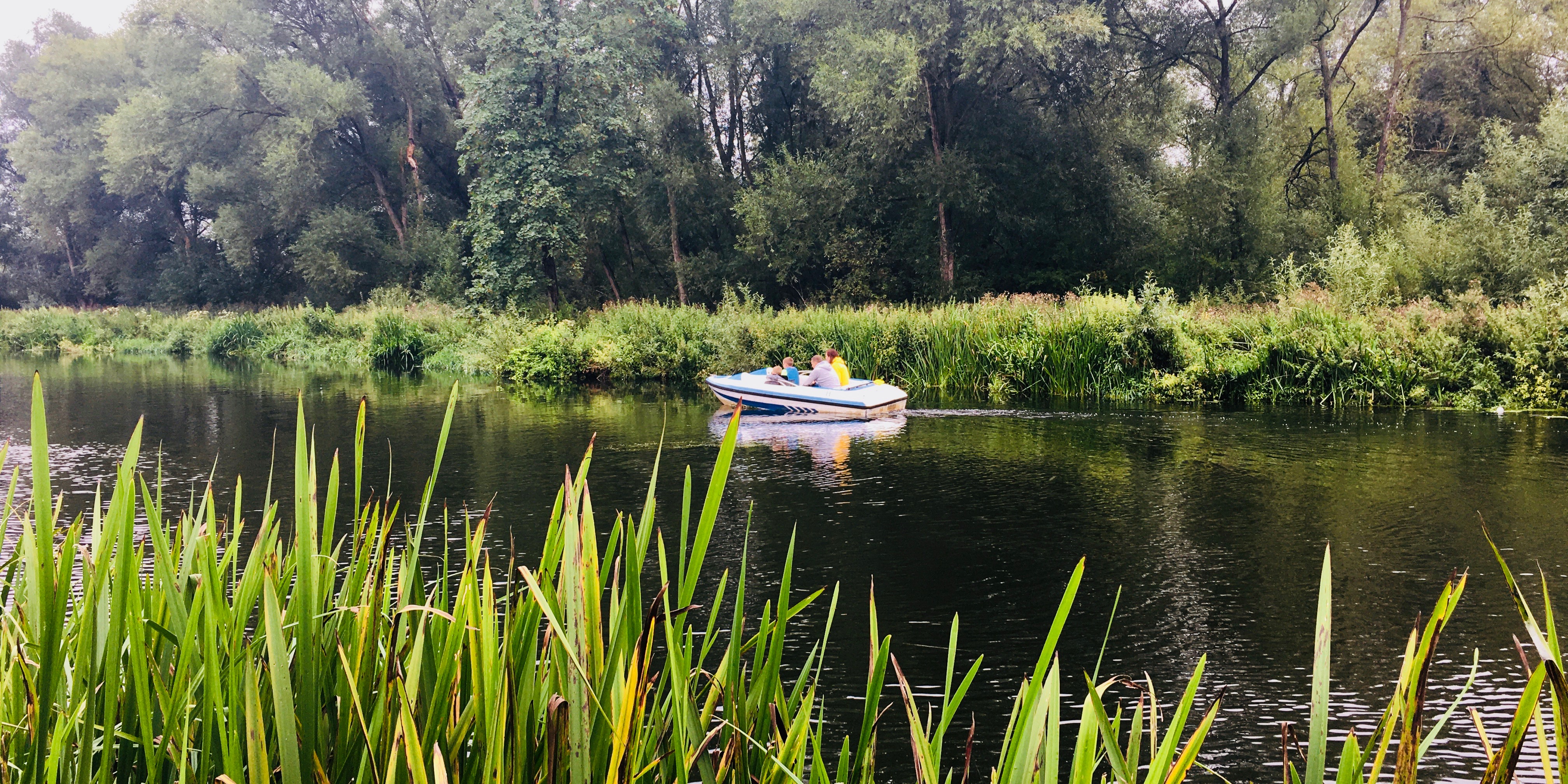 Boating on the Lee

Our walk took us through Silvermeade, a stronghold for the highly endangered water vole as well as home to hairy dragonflies, banded demoiselle damselflies and birdlife galore. My teen and tween are not huge walkers, but there was enough to see and do to distract them from the distance we were covering, including trails through little bird sanctuaries and an orchid plantation, natural play areas and even a dog agility course. Indeed, barely a moan issued forth from either of them during the several hours that we walked – much to my amazement and probably even theirs too. Meanwhile, Coco – used to hour-long excursions to the local park or nature reserve – didn't know what had hit her.

Other days were spent fishing – possible in the campsite itself, beside Dobb’s Weir and at many other points of the Lee (permits need to be bought from designated points) – and picking blackberries on the riverside path that took us as far as Glen Faba, a wild area of water, grassland, reedbeds and walks also perfect for wildlife-spotting. Other families were out enjoying the Valley by bike, canoe or small electric boats.

When we weren’t checking out local pubs and cafés, the Big Chief had a toaster, a hob, a kettle and a microwave for basic cooking, and we hired a fire-pit and barbecue for the obligatory sausage fests and marshmallow-toasting sessions without which any camping holiday is incomplete. With a small play area and a shop selling the basics, Dobb’s Weir is a very quiet campsite – so quiet that when darkness falls, the local rabbits come out and make the place their own.

It’s strange, in such peaceful surrounds, to think you’re so close to London; trains from Broxbourne to London Liverpool Street take just over 30 minutes. That makes camping in the Lee Valley a viable way of seeing the British capital on a budget - we all know how expensive it is staying in the city itself.

But we resisted the bright lights of London in favour of exploring more of the local area. A lovely find was an area of nearby Epping Forest called Warren Pond/Barn Hoppitt, where – as a storm rumbled overhead – we discovered some of England’s oldest trees. Certain trees here are thought to be as old as, if not older than, nearby Queen Elizabeth Hunting Lodge, built on the orders of Henry VIII in 1543. Again, as well as being fantastic for another social-distancing dog walk, this area of the forest is recognised by scientists as as internationally important for the rare insects and fungi that inhabit it.

England is full of surprises, bad and good. Go with the flow and you might just be surprised by what you find.

Big Chief Wigwams sleeping 4 plus a dog at the Lee Valley Dobb’s Weir cost £85/night. There are also safari tents (no dogs). Bike, canoe and boat hire is available around the Valley, including campsites, Broxbourne Old Mill and the White Water Centre. Rafting Unleashed at the Lee Valley Whitewater Centre costs from £50pp, family rafting is £200 per raft holding up to 5, including a £25 soft drinks voucher for the café. At the time of writing there were limited slots for family rafting for ages 8 years and up, but ’Rafting Unleashed’ – open to ages 12 and up– was not yet up and running again. Check the website for updates.