How do you talk to your child about war? You can read books, you can watch films, or you can take them to a place where the remnants of war are all about you. That’s not easy, but it’s a lesson your family will never forget.

The Vietnam War (known as the American War in Vietnam) may be more recent than either the First or Second World Wars, yet it’s far more remote to my kids. I’m ashamed to say my teenager, despite her A level in History, had never heard of it. But she has now.

'We climbed down into the muddy holes, now widened so Western tourists can fit in them – although we still had to stoop and the complete darkness and damp was stifling, making it difficult to breathe. The kids have learnt first-hand that there’s nothing glorious about war.'

We've been on holiday in Ho Chi Minh City, formerly Saigon but renamed after the iconic Communist founder of modern Vietnam. In the courtyard of the War Remnants Museum are captured American tanks, camouflaged reconnaissance planes and a Huey helicopter. We sat and imagined what it would have been like in the 1960s, when it wasn’t the swarm of the mopeds on the road outside but the propellers in the air above that would have deafened us, and when tanks rumbled along Saigon’s streets. Inside, the Historical Truths gallery unflinchingly showed the human cost of conflict, with photos of families fleeing from US attacks. The faded casualty charts, with so many noughts after each figure, were chilling. 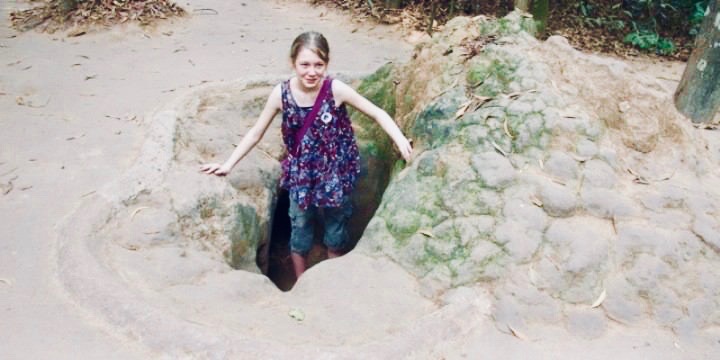 Dea's daughter climbing out of a Cu Chi tunnel

Some rooms were too horrific for the 11-year-old twins, and I acted as censor, shooing them past a gallery showing child victims of Agent Orange.

The ‘tiger cages’ – wire cages no bigger than coffins – used by the Americans to imprison Viet Cong captives startled the twins; not even they could have sat up straight in them.

Now we knew a little more about the war and its effect, we took an hour-long speedboat trip along the broad Saigon River to Cu Chi, where Vietnamese guerrillas hid in a 250km underground network of tunnels to surprise the American forces. We climbed down into the muddy holes, now widened so Western tourists can fit in them – although we still had to stoop and the complete darkness and damp was stifling, making it difficult to breathe.

The kids have learnt first-hand that there’s nothing glorious about war.

But Vietnam hasn’t only taught them about conflict but also about Communism – just as much a part of the past to them.

‘What’s Communism?’ my 11-year-old boy asked, guessing it might be a type of cuisine.

So it was my turn to tell a few ‘historical truths’. Vietnam is still a one-party Communist state.

After all our historical forays, it was important we had a refuge to retreat to. We stayed in the air-conditioned calm of the Equatorial Hotel, a quick, cheap taxi ride from downtown Saigon in one direction and the bustle of the Chinese district of Cholon in the other, where capitalism flourishes at the fake flower and fake Gucci handbag stalls. When it’s such a sensual assault outside – the intense inner-city humidity, the swarms of mopeds buzzing along every street and occupying every pavement, the challenging history on every corner – a big, cool, granite-floored hotel is welcome.

All this might not sound like a holiday, but it is. It’s a history lesson of the most immediate, powerful kind. If holidays are meant to last a lifetime, this one to Vietnam certainly will.

Find out more about family holidays in Vietnam.

See our other features on war-related holidays, sites and days out with kids: Arras with Kids, Sri Lanka with Kids and Somme Battlesites.

Save up to £250 per family on holidays departing in September with TUI. BOOK NOW