Just a few weeks after opening (in May 2019), and Mark Warner’s resort on the west coast of mainland Greece was in full swing. There was a mix of couples and friends who regularly return to Mark Warner resorts for the sporting activities and the sociable atmosphere, a few families with teenagers who had just finished their GCSEs – taking advantage of the out-of-high-season rates – and a good number of parents with pre-schoolers. Many of the latter, I noticed, were expecting again – this is a great place to come if you need to have a bit of a rest while your kids are more than ably entertained by the highly qualified, English-speaking nannies, both daytimes and in the evening if you wish.

“The thought of in-resort entertainment normally brings me out in hives, but the weekly Rock the Room
in the beach bar is a brilliant night for adults and teens (although there were parents there dancing with their babies too!) – one that has literally everyone dancing and singing along to tunes new and old.”

The Paleros Beach Resort was a Mark Warner resort around a decade ago but lay abandoned and overgrown for many years, until the firm bought the property and transformed it into this, its second purpose-built resort. The first is the Levante Beach Resort in Rhodes, and indeed the Paleros feels like a smaller version of that – sleek, contemporary and even a bit minimalist. As at the Levante, rooms are spread around the plant-filled grounds in several low-rise (two-storey) buildings, giving a feeling of space even when it’s full. Many are designed specifically with families in mind – some, for instance, have separate parents' and kids' sleeping areas divided by a partition. 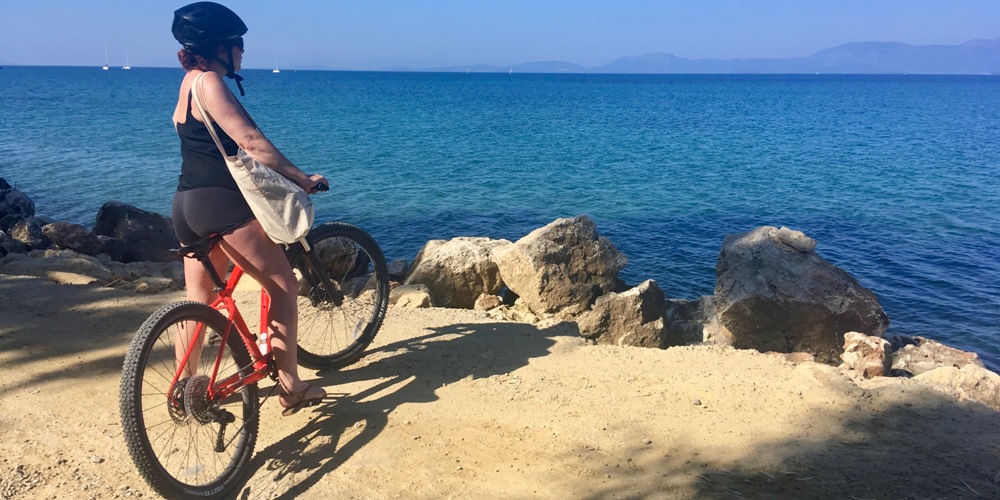 The enthusiastic team here – the majority of whom have done seasons at other Mark Warner beach clubs – create a great atmosphere where everyone enjoys themselves, no matter how much or how little they choose to do. As at the other resorts, most activities are included in your holiday price, with optional tuition extra. Over the course of my stay, I enjoyed SUP paddle-boarding, yoga sessions in the open-walled fitness pavilion, a great-fun group tennis lesson, a sailing lesson, a ride in the speedboat while it pulled the inflatable sofa (for which I was feeling too tender!) and a cycle ride along the coastal path to explore the pretty nearby town of Palairos with its waterfront restaurants and small shops. Other activities I didn’t get round to were kayaking, water-skiing and wake-boarding.

Further highlights of the stay were a boat-trip out to the island of Meganisi, where we stopped off to swim at Fanari Beach, lounge in sea-hammocks and lunch at a waterside taverna (Mark Warner reception staff will happily book this trip for you) and the Rock the Room Friday-night party in the Paleros beach bar. Normally the thought of in-resort entertainment brings me out in hives, but this weekly event organised by the remarkable tennis coach Leah is a brilliant night for adults and teens (although there were parents there dancing with their babies too!) and has literally everyone dancing and singing along to tunes new and old.

The food is usually served on a half-board basis, with breakfast included and also a buffet dinner all but two nights a week. On those evenings, staff share their recommendations for nearby tavernas, or you can pay extra for the Mark Warner barbecue. At lunch, you can eat at the resort’s à la carte beach restaurant or, in high season, in the buffet restaurant. Fresh local produce is made excellent use of in dishes including Greek salad, pork gyros and veggie burger with halloumi. This being Greece, it all feels fabulously healthy while allowing you to indulge yourself. On the subject of indulgence, the resort also has an adult-only pool in addition to the vast main family pool, plus a compact but inviting spa.

In short, Mark Warner has a tried-and-trusted formula that ensures a huge level of repeat custom and loyalty. In addition to the atmosphere, the activities and the childcare, what’s made the Paleros an instant favourite among them is its location – a gorgeous bay in an unspoilt spot just a 30-minute transfer from tiny, hassle-free Preveza airport, a three-hour flight from the UK by Mark Warner charter flight.

Find out more about the Paleros Beach Resort including booking with our specialist agent.