Most people spend very little time in the Malay capital, flying in and out at the start of a longer holiday in Malaysia (perhaps on the island of Langkawi, in Teman Negara National Park or in Penang) or during a stopover to other parts of Asia or to Australia or New Zealand. Like them, we only spent a very short time in Kuala Lumpur, but what we packed into it made us keen to go back and make more of what is definitely worthy of a proper city break in its own right.

It had to start at the Petronas Twin Towers – the tallest buildings in the world from 1998 to 2004 and still the tallest twin towers anywhere. Obviously, you come here for the views, but the experience starts in the lobby, where sci-fi-like virtual holographic guides give you a brief safety proceeding. You then proceed to the 41st-storey Skybridge, where interactive terminals help you identify the city’s landmarks, before heading up to the 86th-floor observatory for even more far-reaching views over this fascinating city. Right beside the Towers is Kuala Lumpur City Centre Park – after gazing down into it, you can head there for twice-daily shows at its dancing water fountains on Lake Symphony, its large playground and its kids’ swimming pool.

‘Book a babysitter so you can make the most of KL’s great nightlife. We loved going in search of some of Kuala Lumpur’s ‘hidden bars’ – speakeasies taking their cue from the American prohibition era.’

As a sharp contract to the modern skyscrapers, we then went for a gander at British colonial-era landmarks Sultan Abdul Samad Building and Kuala Lumpur Railway Station, and afterwards browsed the city’s restored Art Deco Central Market with its stalls selling traditional Malaysian, Chinese and Indian crafts and other items. We had lunch here in the market building too, at Precious Old China Cafe with its characterful decor of Malaysian antiques and vintage colonial furniture, serving delicious Straits Chinese cuisine (essentially, Chinese ingredients cooked with Malay herbs and spices). 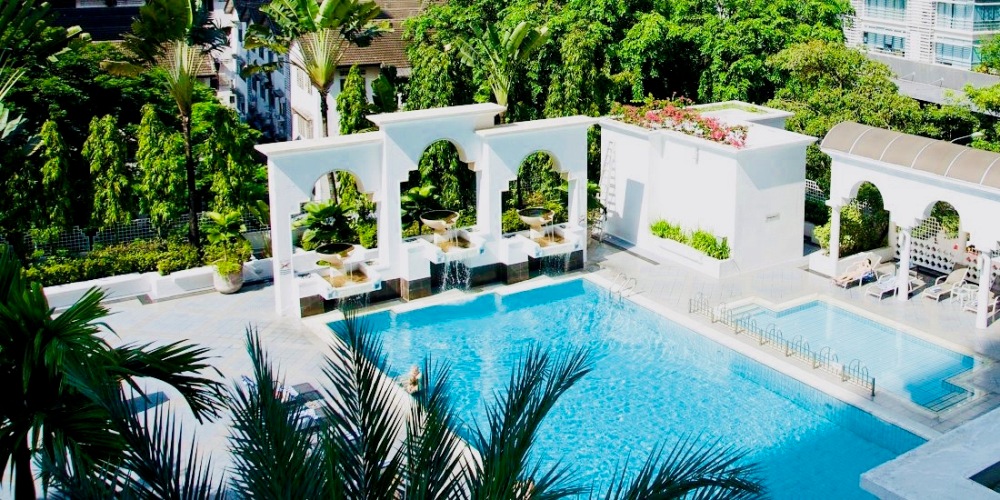 In terms of family-friendly places to stay in Kuala Lumpur, we rated both the Hotel Istana and the Sama Sama Hotel KLIA (KL International Airport). The former has a fantastic city-centre location, family rooms, some with eye-boggling views of the Petronas Towers, an outdoor pool, spa and great food including copious breakfast buffets of both Western and Asian dishes. The latter is, as the name suggests, right by the airport (you can look up at the control tower from its outdoor pool). Guests here can take advantage of the hotel's fast-track airport service, including lounge access, costing around £20pp. You can also rent rooms for just a few hours – useful for those on a stopover or needing to fresh up before or after a flight before heading elsewhere in Malaysia.

Both hotels also offer babysitting so you can make the most of KL’s great nightlife. We loved going in search of some of Kuala Lumpur’s ‘hidden bars’ – speakeasies taking their cue from the American prohibition era. The best was PS150, squirrelled away behind the facade of an old toy shop and offering the most incredible cocktails, including Rumble in the Jungle (coconut and pandan rum, tuak, Campari, tropical juices, Elemakule bitters, gula melaka and curry leaf) and Salty Nihonsan (shōchū, preserved orange peel, lime, lemonade and orange bitters). If those aren’t enough to tempt you out of your hotel room, I don’t know what is…

Top Things to Do in Kuala Lumpur with Kids

As well as the above sights, we recommend:
• Heading for the Perdana Botanical Gardens, home to the National Planetarium, a deer park, a butterfly park and the world’s biggest free-flight walk-through aviary.
• Venturing to KL Forest Eco Park Park, one of the oldest permanent forest reserves in Malaysia, with nature trails, a 200m-high canopy walk, a playground and even a campsite.
• Delving into Petrosains, The Discovery Centre, with its interactive exhibits, science shows, maker studios and school-holiday workshops. It’s in the vast Suria KLCC shopping mall.
• Meeting the underwater creatures at Aquaria KLCC, one of the largest aquariums in Southeast Asia, with more than 150 species of marine life including tiger sharks and lethal sea snakes.
• Taking a day-trip to the iconic Batu Caves with their Hindu temple and shrine.
• Journeying 15 minutes out of the city to splash and ride at the Sunway Lagoon theme park.

Read more about family holidays in Malaysia and about visiting Malaysia in general. British Airways flies direct from London to Kuala Lumpur, while transfers and tours can be arranged with Asian Overland Services.

Get up to $1200 Disney Dining and Merchandise Credit per room, 14 Disney Park days for the price of 7 and $100 Disney Spending Money with selected 2023 holidays*. BOOK NOW