The Tenerife Carnival with Kids

It’s February half term and the mercury is hitting 24°C, making it warm enough to sunbathe and to take dips in the rooftop pool of our hotel, the family-friendly Taburiente with its triple rooms and suites sleeping four. But winter sun is not the only reason to bring the kids to Tenerife outside of high season – late February is also the time its lively capital, Santa Cruz de Tenerife, hosts its spectacular Carnaval, considered the most Brazilian of all Spanish carnivals.

Carnaval, we discovered, is a great way to get under the skin of Tenerife more than you might if you stayed in a fly-and-flop resort. Spread over an entire month, it culminates in a main week of fantastic parades and wild street parties that attract 300,000 people to the city on this island that only has a population of 900,000.

'It feels like a festival that’s taken over an entire city for a week and barely costs a penny to boot. What’s not to like?!'

How you approach the Carnival depends on how old your kids are. The start of the main week is a mighty night-fall parade of stunningly crafted, glittering floats, acccompanied by marching bands and troupes of colourfully outfitted dancers – many of them local children. There’s also another Sunday-afternoon parade with the same floats and marchers if you couldn’t make the first one or want another eyeful. 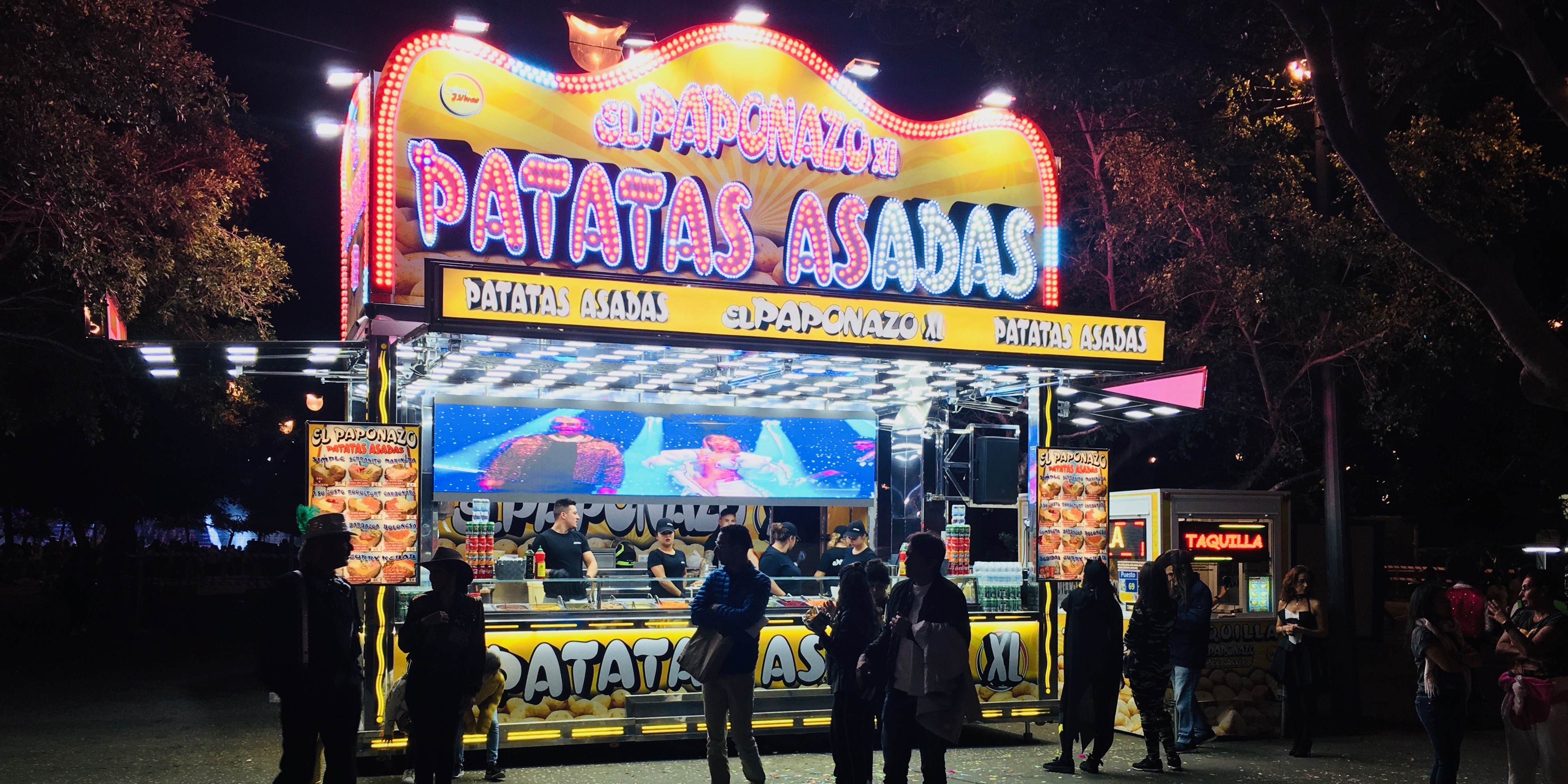 A food stall at the Tenerife Carnival

Many of the spectators dress up too – we did, and felt more properly involved that we probably would have done otherwise. In 2020 the theme was supposed to be 1930s–50s, but the array of costumes was wild, hilarious and utterly random – we saw everyone from superheroes to Alice in Wonderland characters, from pirates to witches, and from dinosaurs to Halloween monsters, and lots of people in drag. Some costumes are fairly skimpy or even rather outré, so prepare to distract your kids from anything they might find a little eye-opening.

Parades, dancers and musicians aside, Santa Cruz is filled with revellers until the small hours throughout the main week (most people are still out when dawn breaks), so if you come with teens they’ll have a ball moving from stage to stage and dancing to music ranging from Latino to techno, belted out from sound systems or played by live bands.

The fact that everyone is dressed outlandishly makes for friendly, multi-lingual, multi-cultural exchanges and lots of banter, and the streets are lined by stalls and bars selling delicious Spanish food and beer at ludicrously cheap prices. The event itself is completely free. It basically feels like a festival that’s taken over an entire city for a week and barely costs a penny to boot. What’s not to like?!

Tenerife is famously filled with family-friendly attractions, from award-winning water parks to great beaches and cable-car rides up volcanic Mount Teide with its walking trails and observatory. Aside the festival, we loved our boat-trip out from Puerto Colón on the south coast with Big Smile Charters. Basking in sunshine on the deck, we spotted a sea turtle, a whole pod of pilot whales, and more dolphins than we could count, riding the waves, leaping out of the water, and playing alongside our boat. It was one of thos blissful, out-of-time moments that makes you want to pinch yourself.

Up to 30% off May half-term family holidays with Eurocamp - 7 nights from just £160 per family!