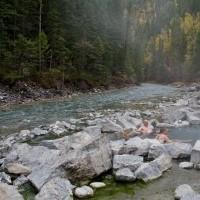 In celebration of its 150th birthday (the anniversary of the founding of the Canadian Confederation on 1st July) and the 100th birthday of its national parks (47 across 13 provinces), Canada is offering visitors free access to the latter throughout 2017.

To get a pass, which offers free access to 171 national parks, historic sites and marine conservation areas from the Pacific and the Atlantic to the Arctic, visitors need to register online at pc.gc.ca. Camping fees and ranger tours are not included.

Other Canadian birthday celebrations will take place in Charlottetown (its birthplace), the capital Ottawa, and Vancouver with its 11-day First Nations Dance Festival.

Also new (or rather completed) this summer is the Trans Canada Trail or Great Trail, stretching nearly 25,000km.