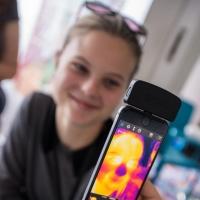 Celebrity Cruises have brought science and innovation out of the classroom and into family cruise holidays with the addition of their exclusive Anturus Explorer Academy.

Aimed at inspiring budding adventurers, scientists, explorers, inventors and innovators, the free program mixes education and entertainment with its experiences, live demonstrations and challenges based on the STEM subjects: science, technology, engineering and maths. Anturus is a Wales-based adventure business providing content to UK schools to ignite the imagination of young people.

On the Academy agenda are survival skills such as shelter-building (including a camp-out evening on the top-deck lawn), building weather stations, learning about alternative fuels and about navigation for ships using the stars, creating mini-ships that can carry cargo, and making your own compass.

The academy is part of Celebrity Cruises’ re-launched Camp at Sea program of specially tailored activities helping children and teens uncover the world around them. These include a Scratch DJ tournament to learn how to mix music and iTake movie-making using a Go Pro camera. Camp at Sea is on offer on all Celebrity Cruises ships except those in the Galapagos.