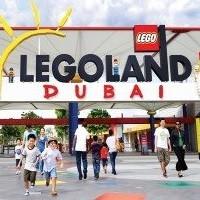 A new complex of three theme parks will open in Dubai on 31 October 2016 – just after the UK October half term but in time to make the UAE a great choice for a Christmas family holiday.

The complex will embrace Bollywood Parks™ Dubai, MOTIONGATE™ Dubai and LEGOLAND® Dubai, plus LEGOLAND® Water Park. Said Raed Kajoor Al Nuaimi, CEO of Dubai Parks and Resorts, “Nothing of this magnitude has ever been done before, and we look forward to offering our guests close to 100 unforgettable rides, attractions and experiences.”

The world’s first Bollywood-themed park, Bollywood Parks™ Dubai will include immersive rides, live performances and Indian food courtesy of everything from a fine-dining restaurant to street-food carts. Visitors will enjoy 3D and 4D re-creations of some of Bollywood’s greatest blockbusters, including Don, Lagaan and Sholay, plus an eye-boggling  stunt show and a Broadway-styled Bollywood musical.

The Hollywood-inspired MOTIONGATE™ Dubai brings together three legendary film studios in one theme park: Sony Pictures Studios (including the Smurfs), DreamWorks Animation and Lionsgate. Among the offerings will be a Ghostbusters dark ride and the world’s first theme-park attractions inspired by The Hunger Games. Note that not all MOTIONGATE™ attractions will be open for the general Dubai Parks and Resorts unveiling.

Like its counterparts elsewhere, LEGOLAND® Dubai and LEGOLAND® Water Park will provide LEGO®-themed adventures for kids aged 2-12 within six themed lands, including LEGO CITY with its airport and the LEGOLAND driving school. Dubai’s LEGOLAND will have the first indoor air-conditioned MINILAND, which will include Build a City with a 10-metre play table where kids can collaborate on an ongoing city skyline. The water park will feature the Build-A-Raft River, where kids can customise a raft using LEGO soft bricks and use it to floating down a lazy river with views of the whole park.

Other features of Dubai Parks and Resorts will include Riverland™ Dubai, with themed shopping, dining and entertainment, and the Polynesian-themed Lapita™ Hotel, part of the Marriott Autograph® Collection, with 501 rooms and three villas. It will include adventure playgrounds, kids/teen and adult fun pools, child-friendly restaurants, family spas and adult-only spaces.

Read more about family holidays in Dubai, including child-friendly places to stay and things to see and do with kids.