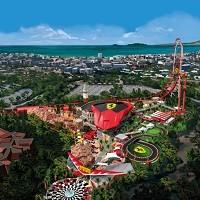 Friday 7 April 2017 will see the long-awaited opening of Ferrari World, a new area of PortAventura World near Barcelona that will be home to Europe’s tallest, fastest vertical accelerator rollercoaster.

Giving visitors the chance to experience the thrills of being a Formula 1 driver, the Vertical Accelerator will achieve its top speed of 180km/h in five seconds, shooting riders over a 112m ‘top hat’ and back down at a nerve-jangling 90° angle.

The only Ferrari-themed park in Europe – the only similar attraction in the world is Ferrari World in Abu Dhabi – Ferrari Land will also include two bounce-back towers, a family racing circuit, eight driving simulators, replica facades of Italian monuments including the Colosseum, and an Italian trattoria.

PortAventura is already home to Shambhala, the tallest, fastest rollercoaster in Europe, and to several other thrill rides including Furius Baco and Cobra Imperial. There is also a huge choice of tamer rides for those with younger kids, some of them in the Sesame Street themed land SesamoAventura. There are additionally several themed hotels on-site.

Read more about PortAventura World including savings on multi-day tickets.