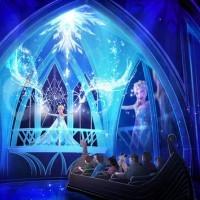 • Universal Orlando's Islands of Adventure sees the opening of ‘Skull Island: Reign of Kong’, with guests able to board huge off-road vehicles to explore ancient temples, encountering hostile natives and fending off various terrors along the way. There is also a new on-site hotel resort (the fifth): the Loews Sapphire Falls Resort, with an old-world Caribbean theme and a pool with waterfall.

• Walt Disney World Resort opens the much-anticipated ‘Frozen Ever After’ in the Norway Pavilion in Epcot – a family boat-ride combining the hit songs with new technology. Also at Epcot, the popular ‘Soarin’ attraction has a new film and an extra theatre, and there are four new shows across the park: ‘Star Wars: A Galaxy Far, Far Away’, ‘Star Wars: A Galactic Spectacular’, ‘The Jungle Book: Alive with Magic’ and ‘Mickey's Royal Friendship Faire’.

• Seaworld Orlando debuts a 60-m-tall rollercoaster or ’hypercoaster’ (Orlando’s highest, fastest and longest), named Mako after one of the world’s fastest-known sharks. The ride forms the centrepiece of a new shark-themed plaza.

• Legoland Florida Resort introduces its Creative Cove, where young visitors can build and race their own LEGO boats, as well as a new immersive 4D movie,’LEGO NEXO KNIGHTS 4D: The Book of Creativity’.

Read more about Orlando family holidays, including child-friendly places to stay and eat, and things to do with kids.

Save an additional 5% on already discounted attraction tickets at VisitOrlando.com/tickets with the New For Summer promo code: NFS2016. Offer available until June 15, 2016.