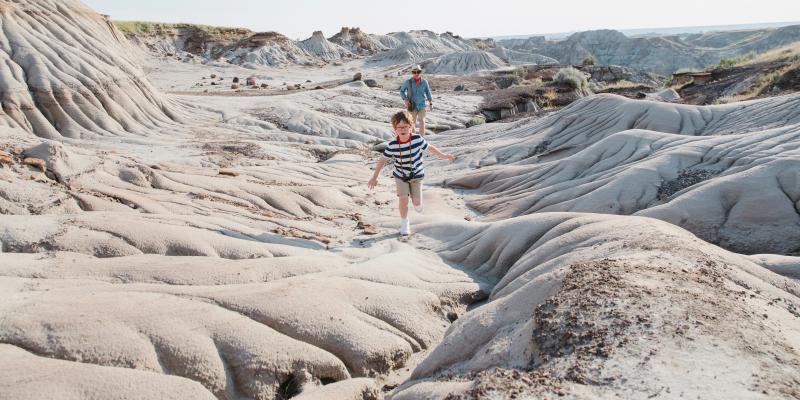 On the hunt for relics in Alberta.

The first new tyrannosaur discovery in Canada for half a century, ‘The Reaper of Death’ as it has been dubbed (official name: Thanatotheristes degrootorum) is directly related to the T. rex

Palaeontologists at the University of Calgary and The Royal Tyrrell Museum in southern Alberta have established that fossils unearthed by local farmer John De Groot are one of the oldest tyrannosaur species ever found in North America. At approximately 79.5 million years old, it's 2.5 million years older than its nearest relative.

Alberta is a great destination for lovers of prehistory, with the world’s richest fossil sites. Families can have fun prospecting for fossils while hiking in the spectacular badlands or taking part in official bone-bed excavations.

A must stop-off during any ‘dino-hunting’ adventure in Alberta is Drumheller, home to the world-famous Royal Tyrrell Museum of Paleontology. Housing one of the biggest displays of dinosaurs in the world, it's the only museum in Canada dedicated to the study of ancient life.

Another must-see is the Dinosaur Provincial Park, a UNESCO World Heritage Site that stands out for its huge badlands and its vast number of fossils and other paleontological treasures. Its one-, two- and three-day guided excavation programs are authentic dinosaur digs that allow visitors to contribute to scientific research at the Royal Tyrrell Museum.

The fossils of the new dinosaur are expected be on display at the museum in late 2020.

Read more about family holidays in Canada and about visiting Alberta. See also our feature on 13 thrilling places to find fossils and dinosaur remains.