One-parent Holidays on the Rise 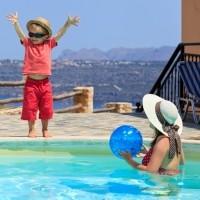 One-parent Holidays on the Rise

According to a new report by Nationwide Savings, the number of parents taking holidays with their children but without their spouse is on the rise.

Among the contributing factors to this are the difficulty of getting time off work, and the threat of fines for term-time holidays.

The survey of 2,000 parents with school-age children suggests that traditional family holidays are becoming more difficult to organise, causing many mothers and fathers to travel without their partner.

Almost a third (30%) of working parents say that fines for school absences, as well as work constraints, have resulted in them going on a trip with their children but without their spouse; for 10% of them, this is a frequent occurrence.

Further analysis of the results reveals that 81% of parents find that work pressures make it difficult for them to book time off, with 61% claiming that they need to book three months or more in advance in order to secure the weeks that they want.

Another factor behind the trend is the issue of childcare during school holidays, with three-quarters of working parents forced to stagger their time off work in order to look after their kids.

The campaign group Parents Want a Say, who claim that school fines are making it harder for families to get away as a whole, called on MPs to make it easier for parents to book term-time holidays without being criminalised.

See our Tips for One-parent Holidays.